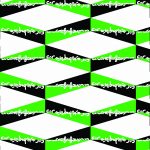 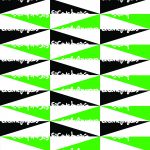 One of the best known media images in Spain is the logo of famous department store chain. Its logo is not only famous because of its form and colour, but also because of its network within a structural module, which spreads itself in different sectors like tentacles by putting its name into a structured module. Therefore, it is easily identifiable.

My idea was to design a graphic compositions, in which the media symbols of this department store is used as the pattern. However, I have applied this pattern in such a way that it continually changes and grows geometrically.

As the work develops, the image is increasingly distorted. Despite the fact that parts of the structure remain intact, the name of the department store is divided in such a way that a new structure and a new logotype are formed. Thus, a new composition appears by chance, so that the name of the department store eventually transforms itself into th Arab word for “ethics”.

This is then again turned around to create the word “unethical” in order to establish a relation with its original meaning.
The structural composition appears itself up to the spectator in crescendo. It is transformed from a composition that hardly looks like the original into one that looks more and more like it.

The new network design is easily assimilated and recognized by the passive spectator since he can identify the origins easily -he does not really deliberately look at the construction in order to understand its meaning. Only through the medium of colour and rhythmic structures do the images evoke resonance and acceptance in the spectator.
This work was inspired by my early memories as an immigrant. After arriving in Barcelona, I tried to make an analysis of the physical ground on which I walked on a daily basis.
The design of the floor tiles consisted of pretty colourful structures. These structures could not be divides into single units. Only one overall order was possible. The design of new compositions was only possible by moving individual pieces.